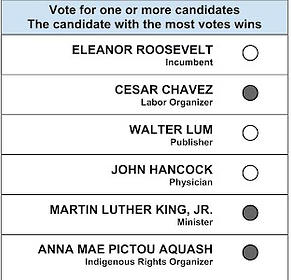 The problem with our presidential election system is not the electoral college. It’s more fundamental than that. Our current system uses Plurality Voting (PV) where you cast one vote for one candidate. It’s because of PV that we end up with outlier candidates winning primaries and third party candidates playing spoiler in general elections. PV usually results in selecting the candidate with the largest minority approval, instead of the candidate with the most overall support.

The solution is Approval Voting (AV). With AV you vote for all candidates that you approve of. While this might seem radical at first it is actually very simple and already supported by our voting infrastructure. With AV republicans in the primary that wanted “anybody but Trump” could have voted for everybody but Trump. With AV you can express your protest vote, but then also vote for the mainstream candidate you find most acceptable. With AV third party candidates get more accurate feedback as to their support, since voters are not forced with the dilemma of throwing their vote away to show support for a third party candidate.

A move to Approval Voting is not only much more practical than reforming the electoral college, it also results in much greater benefit to our voting system. We now have an opportunity for voter reform. If you want to learn more about Approval Voting check out https://electology.org/approval-voting. If after that you are interested in seeing Approval Voting enacted in your state, feel free to use the letter below as a template for writing your own state senator and assemblymember:

I am writing you today as my senator (or assemblyman) to encourage you to introduce legislation to enact voter reform in California — specifically to introduce a bill to implement Approval Voting for all statewide offices and presidential primaries and elections.

This year’s presidential election was historic. We had two of the most unpopular nominees in history. We had an outlier candidate win not only the Republican nomination, but also the general election. And we had, once again, a case where third party candidates played spoiler in a presidential election. All of this was caused by the current practice of using Plurality Voting (PV) to nominate and elect officials. PV usually results in candidates with the largest minority winning as opposed to candidates with the greatest overall support.

The answer is Approval Voting (AV). AV is a simple modification to the current voting system where a voter votes for all candidates that they approve of (instead of a single candidate). While this might seem radical at first, it is a very simple change over PV that not only results in much more accurate outcomes, but is easily implementable with current voting infrastructure.

With Approval Voting “anyone but Trump” republicans could have voted for everyone but Trump in the primary, instead of splitting their votes over the field of moderate candidates. Protest voters could have cast a vote for a third party candidate without worrying about “wasting” their vote, because they could have also selected one of the major party candidates that they approved of. In short Approval Voting is much more expressive than Plurality Voting, without being any more complicated to implement.

There have been attempts to implement Approval Voting in other states. In 2011, representatives in New Hampshire proposed HB 240 (2011). In 2013, a Democrat and Republican from Colorado’s state congress proposed SB 13-065. Both of these failed to be enacted in part because voter reform is difficult to pass since the officials in control have been elected using the current system.

But at this historic moment there is renewed interest in reforming a system that clearly has significant flaws, and California has an opportunity to take the lead in this important area. I encourage you to learn more about Approval Voting (https://electology.org/approval-voting is a good place to start), and introduce a bill to implement Approval Voting for all statewide offices and presidential primaries and elections.